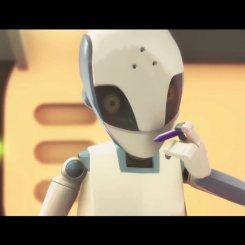 Valencia in 2040… much has changed. In this society, children have fun in their own way. Alice, the hero in this story, amuses herself by hunting small first and second-generation robots in a world where such machines are considered junk. Alice is a very smart girl, but lives a somewhat special situation at home. Alice hates adults and hates her tutor. She’s 13 and her tutor is … a robot.

Primus is a short film directed by Ferran Brooks. Brooks is the only Spanish filmmaker who has won the Panavision New Filmmaker Award. This prestigious award was given to filmmakers like Paul Thomas Anderson (Magnolia, There Will Be Blood, Boogie Nights) and Steven Soderberg (Ocean’s Eleven, Traffic, Erin Brockovich) when they were starting in the film business.

«Primus» was shot largely in the Loasur Studios that are participating as co-producers. This is a sci-fi short film full of state-of-the-art CGI. Two production teams have been working on this project, born in Valencia and produced in Malaga.